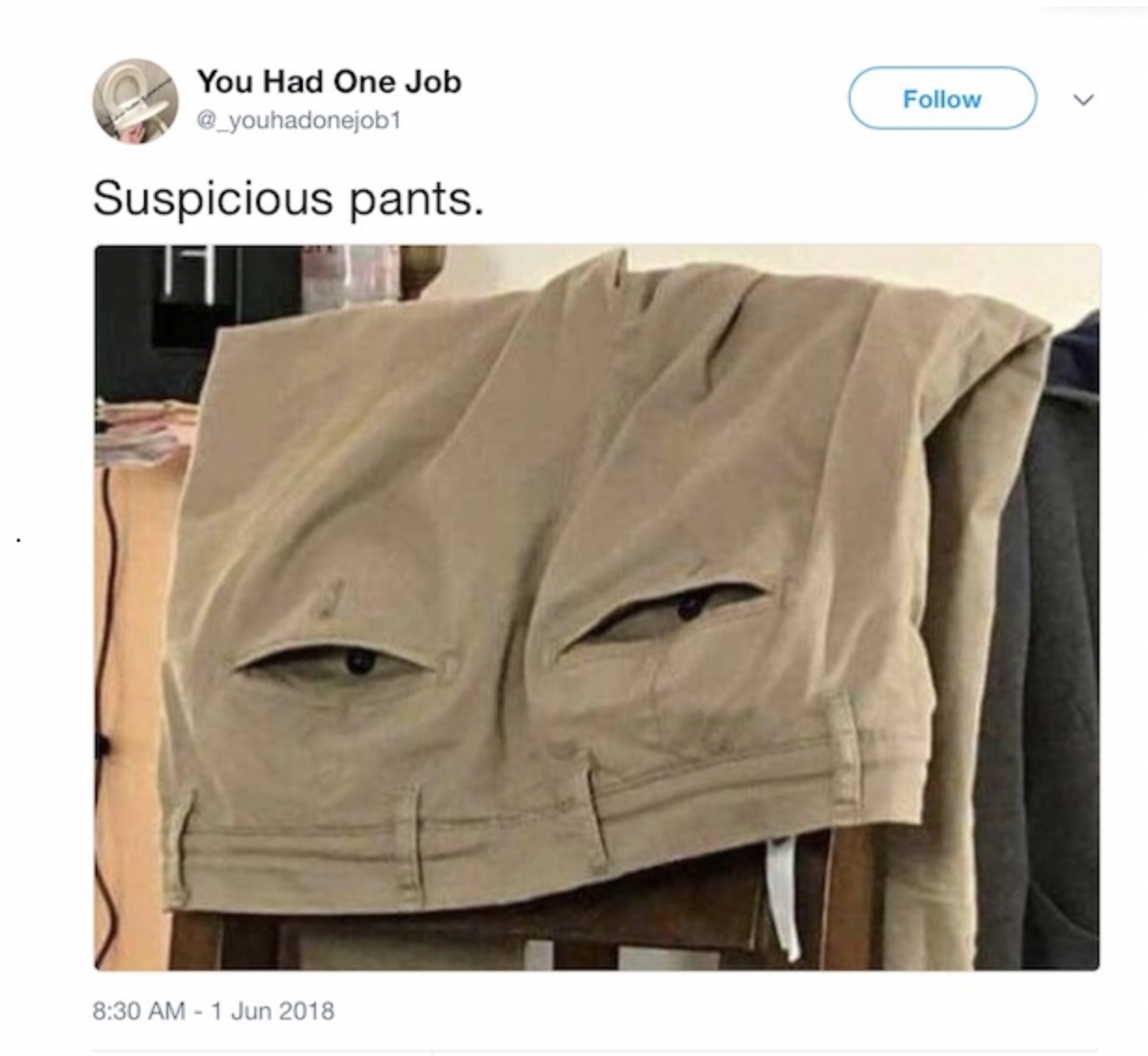 Back in September, a lifetime away, our class was assigned an exercise where I chose to discuss the Suspicious Pants tweet.  My initial thoughts on the inclusion of personified pants as a course epigraph was as short sighted as the immediate arousal of suspicion as said pants. My Professor, Dr. Beth McCoy, shared a tweet depicting a pair of pants thrown over the back of a chair. The resulting image gave the impression that the pants were looking back at the viewer with a caption “Suspicious Pants.” This created a split interpretation; were the pants suspicious of others or were they suspect themself? I expanded on this in my blog post, Suspicious Pants and Greek Gods, where I compared the pants to the Greek God Dionysus in The Bacchae and the recommendation of reading the play at least twice for the class. I demonstrated that there are many factors that lead to deciphering the meaning behind the suspicious pants. I questioned both sides of the argument. What does the reader have to be suspicious of when referring to the pants? Likewise, what could the pants be suspicious of themselves? I addressed the notions of peritext and epitext and their relationship with the subject matter attributing their definitions to Professor McCoy herself. She describes peritext as literary elements that the author can control versus epitext, elements the author cannot control. These concepts were key in deriving meaning from The Bacchae. First I had to read the play and find some understanding. Then I had to research what I had read like the Greek names, certain relationships, and various unknown words. Next I read it with my new found knowledge which lended itself to  more understanding. Finally after our in class discussion, a new fuller understanding formed. This process allowed the time and space for our own thoughts to mature before combining them with others to create something new entirely. A process that I believed was the idea behind the Suspicious Pants and was a satisfying conclusion to the difficult read.

That is, until we read Percivial Everett’s version in Frenzy. This reopened the journey of understanding as we now had another text, a reimagining of the same story, to compare the original to and a deeper understanding to identify. The entire process reset but from a different starting point. I had believed these contrasting ideations was a concrete introduction to a course on identifying and understanding texts. I believed Beth wanted us to look beyond our instinctive reactions and consider the alternative narratives. I believed we were supposed to look into our own prejudices while also seeking others’ understandings as a means to gather a fuller comprehension of a given text. I was right. But as the essence of such an idea dictates, I was also so wrong. Although I was on the right path to finding out how wrong I was, it took a semester to discover the scalability of such a truth. This led to the discovery that the scalability of this truth is inherently infinite. The pursuit of true understanding is like scaling a mountain only to find that once you’ve reached the summit, you’re actually in the valley of another mountain. One may choose to stay in this summit valley hybrid, but for each new mountain they climb, they achieve a higher sense of understanding and the opportunity to keep climbing. There may come a time when they reach the summit and see nothing but clouds around them. It isn’t until another source, whether it be textual, the thoughts of a peer or the simply the passage of time and furthering of life experience, reveals a clearing in the clouds from their perspective that the climber may continue their ascension.

Before I give the examples that come to mind, as the nature of the narrative I am developing it is important to express some prejudices in my thesis and the examples I give. There of course are the baseline prejudices of how I was raised, the culture I grew up in, and the education I have received up until this class. But there is also the notion of how the information was expressed during the class. The choice of books to read from Percival Everett’s oeuvre plays the biggest role in this. The inclusion of some referenced material from within his works, like the choice to watch Lilies of the Field and The Defiant Ones over any other of the films written into I Am Not Sidney Poitier. Then there is the order they were presented, the classmates that I shared the experience with, and the nature in which our Professor presented the material day to day. All of this combined came to affect how we climbed our mountains of understanding and also what we saw once we finally reached the top.

Given the pieces we worked with, it is apparent that Everett enjoys modernizing pieces he is referencing while also making it a point to express the darker or intense scenes with the brutality he believes they deserve. From The Bacchae to Frenzy, Everett makes sure nothing is lost in translation when rewriting the ancient Greek play. He explicitly describes delicate intimacy the characters share when they fall under Dionysos’s spell. He also writes out the vulgar truth beyond their more barbaric actions like when the Maenads rip apart the flesh of man in the same manner they tore a cow to shreds. It is also important to note he changed the name of some characters but specifically Dionysos’s name. Although it isn’t wrong as Dionysos goes by many names and Dionysos is an acceptable spelling, it is different from The Bacchae’s spelling of Dionysus. This single letter lets in the thought that he is consciously making each change, no matter how small, with precise and deliberate motives. The changes do not stop there. He goes as far as to introduce new characters and even fully fledged storylines like the inclusion of Orpheus, the renowned poet. He chose to share Orpheus’s story of falling in love with a woman only to lose her to a snake bite. He then traveled to Hell to get her back, only to give into his desire, breaking the deal with Persephone by looking back to see if Eurydice was following him out of the underworld, losing her forever. Consequently, he fell into such a deep depression that when frenzied Maenads demanded he sing them a song, he refused, so they killed him by tearing him apart. Although a classic tale, one might lose sight of its meaning within the confines of the story or rather why Everett chose to include it when he reimagined a play that already worked without it. After a semester of critical thinking growth, I can think of two reasons why he would, especially after considering he himself is a Distinguished Professor of English at the University of Southern California according to his wikipedia.com page. I believe that the inclusion of all these changes are a requirement when taking any literary pieces from the past and bringing them to a modern stage. This goes beyond adding clarity for concepts lost in translation. We as a society have grown accustomed to digesting so much media and content that when revisiting older works, whether it’s a Greek play like The Bacchae or even a film from 64 years ago like The Defiant Ones, the mode that the information is transferred has become almost obsolete. Storytelling has evolved to the point where these narratives seem basic in comparison to what we are used to. Naturally, Everett must enhance these stories in some manner to make them more digestible to today’s average literary consumer. He does this because they still have value in the themes they portray and this leads to my second point. He wants to challenge us. He wants to educate us. He wants us to grow as communal individuals so we may grow as a whole. If you as a reader take the dive into trying to understand as much as you can from his stories, you will find yourself climbing a mountain the likes you’ve never seen before. That climb will make you stronger just like it will make another reader that much stronger too. So once you finally ascend to your personal Mt. Evere(s)tt and you find another reader waiting for you at the top, you can combine your understanding and climb even higher than ever before.

The phrase “perpetual student” is a phrase that is usually tied with a negative connotation. It describes a person who continually attends classes at a college in order to avoid having to enter the workforce and get a real job. A Capitalist’s worst fear. But the perpetual student mentality can be one of the most valuable tools for self growth. The concept comes from the idea that education is always available to us in some manner, usually as simple as taking the time to ask why, and those who access this education will continue to develop their character. The pursuit of understanding is much like the pursuit of perfection. Many consider it a black and white topic. You’re either perfect or you’re not. You either know something or you don’t. But in reality, the winning side of these arguments are those who don’t stop that pursuit. They may slow down, even take a break, but it isn’t until you refuse to carry on that you begin to “lose.” This argument breaks down a little here because the point of it all isn’t to win or lose, it is to grow. This growth comes from trying, failing, and trying again. It would take a lifetime to fully dissect each word written by Everett, or any author really, and find the meaning behind it all. But that’s not the point. By finding one aspect of Everett’s works and deciding to climb that specific mountain of understanding, you will find yourself with a heightened viewpoint of everything else.

When it comes to the question of whether or not the Suspicious Pants are suspect themselves or suspicious of something else does not matter in the end. Much like asking why a picture of pillows were included in our final assignment. Is this what the pants were looking at? Do we finally get to rest? Is this the post journey pillow talk? What matters is the act of questioning it and trying to find reason. We as a class had questioned it in the beginning, some even chose sides, but climbing that mountain of why is what led us to our next climb. Another why. The scalability of asking questions and seeking understanding is infinite. Understanding that at first can be daunting. But in time, it becomes comforting. One step at a time, we will all grow as long as we only stop to smell the flowers.

This site uses Akismet to reduce spam. Learn how your comment data is processed.